Introduction to Ingrown Toenails and Abnormalities 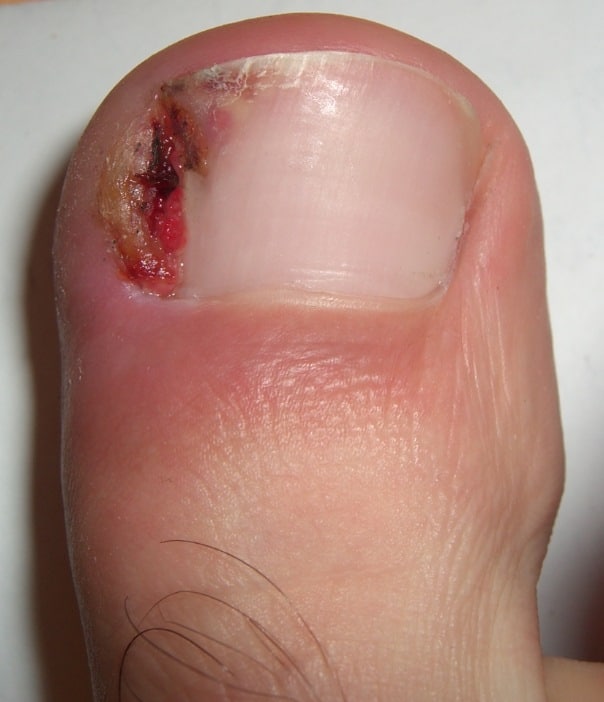 Ingrown toenail is a condition that most commonly affects the hallux, or big toe. This condition usually results when pressure from improper shoewear, and improper care of the toenails leads to pain and hypertrophy (or overgrowth) of the tissue at the side of the nail.

The toenail (and any other nail) is produced by the nail’s germinal matrix, and grows forward to the end of the toe. The germinal matrix is the simply tissue that creates a toenail. Most of us have lost either a fingernail or toenail and watched as the nail re-grew slowly over several months. The area under the nail that attaches the nail to the toe is called the sterile matrix. This area is referred to as the sterile matrix because it doesn’t actually produce the nail, only attaches it to the toe. On either side of the nail there is an area called the nail groove, where the skin of the toe meets the nail matrix and the edge of the toenail.

In the case of the ingrown toenail, the nail groove begins to disappear, probably due to pressure from ill fitting shoes. The chronic pressure of the nail edge rubbing against the nail groove causes irritation and swelling of the surrounding skin. If the condition continues, hypertrophy, or overgrowth, of the tissue leads to permanent changes in the tissue. These permanent changes in the tissue only make the situation worse. Eventually, an actual infection can occur in the area leading to even more pain and swelling.

Improper trimming of the toenail can also be a cause of the problem. If the corner of the toenail is not allowed to grow out past the skin at the end of the nail groove, it may dig into the skin. This makes the pressure from the shoe even more painful.

The symptoms of an ingrown toenail are primarily pain. The toe is red, painful to the touch and it can be difficult to wear shoes. If infection is present there may be drainage of pus from the area as well.

Diagnosis is generally easily made on examination. No X-rays or tests are usually required, unless there is a suspicion that the infection may have spread to the bone.

If caught early, non-surgical treatment may suffice. Pressure on the toe should be reduced to a minimum with sandals or simply not wearing a shoe for several days. The temptation to trim the corner of the toenail off should be avoided. This can lead to a worse condition where the toenail forms a fish hook deformity that further grows into the nail groove. The goal of non-surgical treatment is to allow the toenail to grow out to the end of the toe beyond the nail groove. Intermittent soaks with a warm saline solution may be suggested. If there is active infection, antibiotics may be necessary to eliminate the infection. Once the condition has resolved, shoewear should be obtained that does not put too much pressure on the big toe. The nails should be trimmed straight across, and never below the end of the nail groove.

If the condition has resulted in permanent hypertrophy of the tissue surrounding the nail margin, surgery may be required to treat the condition. In mild cases, removal of a portion of the hypertrophied tissue may reduce the pressure and irritation. In this procedure a wedge of tissue is removed and the healing process allows the nail groove to reform itself.

Finally, in cases of severe deformity of the nail, the entire nail may be removed and the germinal matrix for the entire nail removed as well. This is called a nail ablation. No new toenail will grow back. This should be done only as last resort.

These procedures can usually be done in the office under a local anesthetic.

Fungal Nails are most commonly caused by the same fungus that causes athletes foot. Chronic dryness, itching, and burning can be a sign of a fungal infection of the skin. If this is left untreated, the nails can become involved. They may appear brittle, discolored, and crumbly. Medications are available that are very effective, and safe.

If you are experiencing an ingrown toenail or other toe abnormality, contact Medical & Surgical Foot and Ankle Care and the medical treatment center of Dr Keith Naftulin DPM. We address all issues associated with bone, tendon, muscle, joints, cuticle and skin. You may also schedule an appointment with the doctor’s office on-line.